A Quiet Day of Reflection

Not really. That's just what a lot of people say when they've spent the day fishing. I, however, dwell on how boring it is...In real life and within a game.

Have you ever fished on the game Animal Crossing? If you run past the shadow of a fish in the water, you scare it away, lol. It's kind of tedious. Animal Crossing is a favorite game in our house. Both of my kids like to play it and I've been known to play from time to time. My kids like for me to do the fishing in the game so that we can put the fish in the museum. They say that I'm the best at it but in reality, I just have more patience than they do.

Today, I spent the day with Maruka fishing in Pandaria. I leveled her from 380-something to 425. I'm just trying to level her cooking up without spending a ton of gold in the auction house on mats. I'm trying to be smart about it. ;) I really hate fishing though. The one thing that has made it more bearable is that Maruka has a water strider with the Surface Trot buff and I LOVE it. I mount up (I'm still an 88 and can't fly yet) and ride up and down the rivers looking for pools of fish. Being able to walk on water makes the process go by much faster.

Posted by Unknown at 3:50 PM No comments: 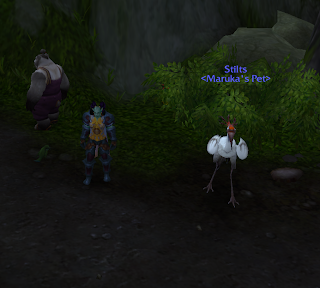 **I apologize for the darkness of my screenshots. I took them at night and it was raining. Also, for pete's sake, don't look at my armor. It's hideous. I'm not to the point where I want to transmog it yet so I'm doing my best to ignore it.**

As a hunter (Hunters RULE!!), one of the things I look forward to most about a new expansion is taming new pets. Finding and taming a new pet is always fun, finding new pet families is fantabulous fun. MoP has six new pet families including the two that came out with the pre-release patch.

So far, I've tamed a water strider, crane, and porcupine. I think, at this point, my blue porcupine, named Petunia, is my favorite. I really like the skins on the porcupine family. I actually traveled to Zangarmarsh when the patch came out to tame a blue Fen Strider because I'm the impatient sort and had to have a new pet right away. I have to say, I really love the Surface Trot ability, which gives the hunter the ability to walk/ride on water. That can be such a convenience. I also like the Still Water buff which increases spell power by 10% and critical strike by 5%.

Lots of new pet looks were also released with MoP. Unfortunately, I am pretty disappointed with all but one of the new cat looks. I really don't like how the cats are so lumpy. It's like they're the Hunchback of Notre Dame of WoW. The one cat that I like, and have tamed, is the Hunched Jade Cat (See??? Hunched is even in the name.). I'm also unimpressed with the look of Pandaren turtles. I tamed one (a brown dragon turtle if I remember correctly) just so that I could have one, but I stabled it and doubt very seriously if it'll see the light of day. Frankly, they're just dull-looking in my opinion. 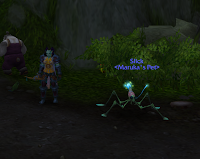 One of my favorite new looks, however, is the water strider. I had to have one of those as soon as I saw one and they also belong to the Water Strider family (obviously). Very nice-looking water bug. I also like the silkworms. I would kind of like to have one of each, blue, green, red, and yellow. I think they're all pretty cute.

As for the pet families I have yet to tame, goats, basilisks, and quilen, I'm excited to add them to my stable, more so for the goats and quilen. The quilen have a very handy skill, Eternal Guardian, which will allow for the resurrection of a party member. I think this will be extremely welcome in an instance or raid, to have an extra party member with this ability. It's just too bad that it can't resurrect the hunter. ;) I just think the goats are cute.

If you'd like more specific and detailed information on the newest pets, check out Petopia. The new pet families are just one more thing about the expansion that I am vastly enjoying. Any other hunters out there with MoP pet likes or dislikes??

Posted by Unknown at 7:00 AM No comments:

A Reason to Rejoice

You already know about my altoholic-ism, right? I think that also extends to the want I have to play many games. I have to stop right here and wonder if I'll ever truly grow up, lmao!!

I have a PC that's about five years old and a MacBook Pro that's about 2 1/2 years old. Hardly any of the guts of my PC are the original parts. I've replaced things like memory and video cards as they've become outdated. Even so, or maybe because of this, it sucks. I can't do ANYthing on it anymore. When I play games, any game at all, I get about 10-20 minutes of play time before I get the blue screen of death. The other day, after letting it sit dormant for a couple months, I decided to give it another try. While wandering about Pandaria, my cat escaped out the window and onto the roof. During the ten minutes it took me to get him off the roof and back into the house, my computer crashed. I sit back down, winded, irritated, and dirty only to see a blue screen. Talk about frustration. I've tried troubleshooting the issue and can't find anything useful on the net. I bought a new vid card, upgraded Windows, blah blah. I'm thinking it's a motherboard issue.

During all the PC downtime, I've been playing WoW on my Mac. It's an ok solution if you don't have an alternative. But the sound sucks (my PC has speakers that'll knock your socks off), the screen is small, the mouse is inadequate, and I have to turn the graphics almost all the way down just so my frame rate will go about 10 fps. Plus, playing on a Mac means absolutely no GW2 since they don't have a Mac client and the frame rate on D3 is so bad I can't function.

Yesterday, I finally broke down and bought a new computer. I put it off for a good two years. Going back to the growing up thing, I feel pretty silly buying a new computer just so that I can play games on it. When it comes to school and business, I do everything on my Mac. So seriously, a new PC's use will be about 99% game play. I rationalized finally making this purchase because my kids like to play the Sims and we don't have a computer capable of handling that game anymore.

I would put my new build on here but I'd probably get made fun of, lol. Despite the fact that I bought a gaming PC, I still went mid-range on components because I can't justify spending much over $1000 on it. It meets and exceeds the minimum requirements for both WoW and The Sims 3 and that was my bottom line. All in all, I can't wait for next week to get here when it gets delivered.
Posted by Unknown at 7:20 PM No comments: