I have been mostly satisfied with the way the garrison functions in the game. When I heard about shipyards, I was only mildly interested to mostly ambivalent about them. More missions. Woohoo. Initially, I found that I liked building ships and being able to upgrade and name them and the missions were sort of fun since I needed to level my new fleet.

Recently, my fleet is mostly topped out, only having to level ships that were replacements for ones lost on missions. Having the majority of my fleet being purple, missions have very little point to them anymore. The main bulk of available missions are experience missions. Then, the requirements for those missions are insane.

I took this screenshot today: 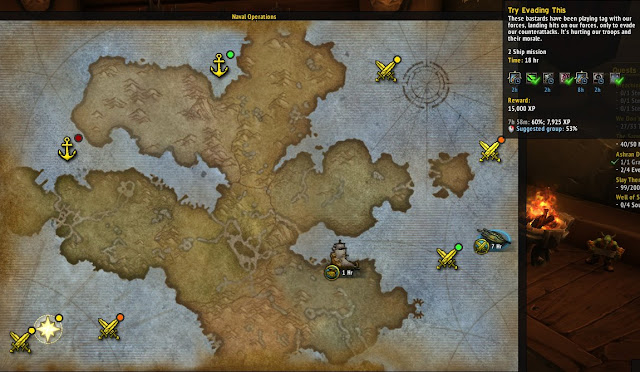 Would you look at the requirements for the mission I highlight?? And the reward is only XP. In order to even come close to being able to do this mission, you'd have to have your TWO ships max level so that they'd have the extra two trait slots filled. If your ships are max level, why do you need to do this mission at all???

Also, if you look at my available missions, the rewards for all but one are xp and one of the missions that I already have a ship on is for Baleful gear.

The shipyard is flawed and a virtual waste of time and resources. That's my opinion though. I'll entertain opposing arguments. ;)
Posted by Unknown at 1:05 PM No comments: