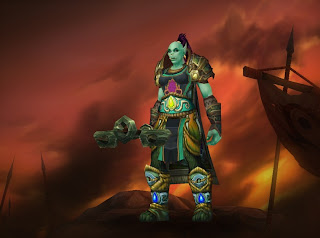 I am a girl gamer. I played Oregon Trail on a Commodore 64 in elementary school. Mario, Luigi, and I were best friends on the original Nintendo. Wait. Hold up. Even before all that, I played Pong on one of those old machines that hooked up to the TV and it was in black and white. What was that called?? And...was that before or after the Commodore 64? I'm old. I forget things.

Games have evolved over the years and so have I. Now I'm mostly into playing World of Warcraft. I even sprang for the annual membership deal so that I could get in on the beta for MoP and Diablo III. I about peed myself when I saw the commercial for Diablo III, by the way. I've also dabbled in Star Wars:  The Old Republic and Guild Wars 2. One of my other gaming loves is The Sims. I've been playing The Sims since the original vanilla and I have all the expansions for 1, 2, and 3. It's one of the few games that I've played consistently since it's launch. I came in on WoW during the Burning Crusade expansion. I was playing Guild Wars at the time and a friend made fun of me saying that's the game that people that wish they were playing WoW play (I had to read that sentence out loud to make sure it made sense, lol.) I don't really agree with that statement, but I was challenged to give it a try and have been playing ever since.

Since starting this blog, I've expanding my guild to actually include players other than myself and have started raiding. My raid team is very low-key, very laid back, very flexible, and our progression is very slow. But we like it that way. Pressure is non-existent and we play because it's fun. I've found my tribe.

I'm writing this blog for several reasons. Just for you, I'll list them:

This blog will mostly be about WoW but I reserve the right to write about other games or to go completely off topic occasionally. It is, after all, my blog.

Lastly, I'm not just a gamer. I'm a stay at home mom and a graduate student. I'm very happily married to my best friend. I'm a social media addict (that's where my socially anxious held back self is free to roam). I'm an anglophile. I'm a bookworm. I'm opinionated and judgmental and unapologetic about it. Welcome to my world. I hope I haven't scared you off. ;)